What they say of New England applies to Helsinki as well. If you don’t like the weather, just wait 5 minutes. Digital infrastructure investments are similar, even if the time frame is a bit longer. But while it’s generally true that the longer you wait to build out, expand or replace your ethernet network, the better, faster and cheaper it will become, you can’t wait forever. The real, present and pressing needs of your business, whatever your business, means delivering reliable, flexible human and device connectivity that will support your business’s digital transformation.

Spoiler alert – If you are interested in taking a look at the business benefits of Mobile Private Networks as an alternative to or extension of your ethernet infrastructure, this is a great place to start.

The High Cost of Ethernet

The fly in the ointment for ethernet, is that even if the material costs have come down (though they haven’t), the time and labour will remain well through the roof.

The good news is there’s never been a better time to take the leap into infrastructure expansion, thanks to the arrival of 5G Mobile Private Networks. And while cost savings are a good opener to this discussion, that is really just the tip of the iceberg when it comes to the benefits of private 5G.

But before we jump into the benefits, it’s important to understand where we are today, and how far we’ve come. And this is really the most important take home message I want to convey here. True technological advancements in the present day are not about making high cost replacements of what came before, for say, higher speeds and more network points, but rather about leveraging them to scale and exponentially expand network capabilities in the way of a force multiplier. In other words, your next investments shouldn’t be about hypothetical or for that matter, even measurable performance gains, but about how they help you and your business effect new and immediately applied operational efficiencies.

It should be said right out of the gate that while 5G Private Mobile Networks represent hands down the the most evolved, most cost effective, highest performing and most flexible path to the shangri la of digital transformation for many businesses, they in no way render obsolete your ethernet network investments to date. Rather, and quite to the contrary, they future-proof those investments by enabling new ways to leverage high speed connectivity while opening the door to the next generation of software defined networks and rich edge 5G mobile devices.

In this article we’ll look at some of the most illustrative use cases and real-world examples of 5G MPNs, but to get there, it’s good to take a look back at how we got where we are today, and why now is a perfect time to make the move.

From Rip, Replace & Repeat to Radio

For going on a generation, an organization’s options when it comes to extending secure, on-premise network connectivity meant a measure of Rip & Replace – extending new physical cabling (old copper to new copper), throughout your facilities. Later, you’d Repeat process with must have Gigabit speed fiber.

Then came the wireless “revolution”, but it wasn’t much one as mobile networking was limited to WiFi and a handful of other lesser known standards. Full disclosure, I was the founding president of the WiMAX Forum that defined the protocol, and so while knowing the ins and outs of 802.11x well, I am also well aware of what they can and can’t do.

Thus, back in the early 10s and even 2015, whether you were an SMB or a massive enterprise in just about any sector, from technology to transport, from farming to factories to finance, you name it, building wireless into your network came with a certain, clear-eyed acceptance that that was as good as it got, and it wasn’t that great.

As I write this, my WiFi, however theoretically capable, can become quickly congested, even unusable with the arrival of but a handful of family members on games or video conferences. Simply put, and though these problems are being solved by companies like Domos, WiFi was simply never designed to deliver on the scale or degree of reliability required for the enterprise and certainly not mission-critical Industry 4.0 automation.

To get to that level of reliability, and we’re in “Five Nines” territory here, wireless options were largely non-existent, that is, until the arrival of Private LTE or Long Term Evolution. The first examples of this were not private, but rather very public, taking the form of a flock of new, low cost Virtual Mobile Network Operators who leased portions of the MNOs mobile spectrum, branded as their own and went to town.

It didn’t take long for the concept to extend into the enterprise where private mobile spectrum could deliver dedicated connectivity to everything from workforce User Equipment (UEs) like phones, to a growing army of IIoT (Industrial Internet of Things) devices and machines.

Cumucore was early to this opportunity, delivering on the promise of extending WLAN, and hybrid fixed wireless and ethernet networks via MPNs and helping to define the way that many of its now mature use cases would come to life.

The G in 5G: Gamechanger

One of the most interesting aspects of that journey has been seeing the many customer wish list items arrive with 5G. Because while 4G LTE opened the gates to an amazingly rapid, cost-effective way to extend or replace pricey ethernet, there were still some technological hurdles and outright showstopper gaps. For example, the simple need to allow your workforce to hop from your private mobile network to a public one was difficult to impossible without Smart SIMs able to handle multi-network handoffs. Fast forward to 2020 and the latest embedded SIMs can do much much more.

Also at the edge, and most critical to supporting 5G capabilities were the arrival of 5G chips, first from the likes of Intel and Qualcomm, and now universally installed in all manner of edge devices, from the tiniest sensors to the largest AI-informed robots and robotic equipment. This not only radically extends the capabilities of these devices for current use cases, but an array of new ones that haven’t been dreamed of yet. They also help in the effort to make networks more efficient by moving increasing amounts of power, processing, analytics and data handling where they are needed most. But I digress. The main point here is that 5G networks wouldn’t be 5G networks if the devices that are on them don’t have 5G chips and SIMs on board.

This is where it gets interesting.

Also on the wishlist, not just of Private LTE users – Cumucore customers included – but the mobile industry as a whole, was digital transformation at the core of the network. Though 5G has been sold to the world in the easy-to-understand language of “faster, better mobile connectivity”, this barely scratches the surface in what it’s all about and the true generational shift that it represents.

One of the burdens of ownership of previous ethernet and even early cell-based radio networks has been the very time consuming processes of making logical changes to those networks. In the case of mostly wireline networks, we’re talking actual physical cable running and routing from server room to factory floor and back again. Mobile networks, considerably out of reach for most businesses just 5 years ago, did suggest a new path forward with the ability to fundamentally rewrite an entire network’s business logic in an afternoon with the help of Software Defined Networks (SDN) and Network Function Virtualization (NFV). And this was the harbinger of 5G networks that are not just faster, but infinitely more powerful, flexible, scalable and secure. Where once telecom networks were a collective of carrier controlled black boxes, 5G has, in employing more open standards, been coded to by a massive ecosystem of players effectively innoculating all comers from vendor lock in. On the security side, 5G takes much of the guess-work out of the best practices of, building in multi factor authentication and delivering layered, zero trust, hardened networks.

Making the (Use) Cases for Mobile

Whether you an agro business bringing an array of new IIoT sensors online or large scale industry 4.0 enterprise the economical advantages merely open the door to a spectrum (pardon the pun) of operational benefits that only mobile can provide. As an early leader in the delivery of Private Mobile and particularly 5G private mobile networks, Cumucore has the advantage of nearly a decade of accumulated experience delivering them in a number of illustrative contexts. To round out this, in what I hope will become a series of articles Making the Case for Mobile, we’ll conclude with a couple of great examples of the work we are doing.

Finland based Quuppa has quickly gone from Slush darling start up to world leader in their space of real-time indoor location based tracking. Their Real Time Locating System (RTLS) provides everyone from industry 4.0 automated factories to high volume distribution centers a constant, accurate read on the assets, equipment, inventory and staff that make their businesses succeed. From operational efficiency to personnel health and safety to facility management, Quuppa’s near infinite use cases are limited only to the imagination and their rapidly growing customer base proves it.

One of the challenges for Quuppa and its customers however has had to do with the many limitations of the ethernet networks that light up their distributed locators. When changes are made to the interior structure of a facility, whether tracking inventory and assets or people, their functioning depends on careful and exacting placement. This means not only high costs of installation of a given Quuppa system but high cost of ownership as an operation’s facility evolves.

In a perfect marriage of network-service solution innovation Cumucore is helping Quuppa deliver to their customers next generation freedom, flexibility and cost savings. Now a Quuppa RTLS’ system’s mesh of networked locators with 5G mobile chips and cells can be installed quickly, easily and cheaply anywhere in a facility. What’s more, as a facility grows, evolves and restructures its interior space those same mobile locators can be repositioned accordingly.

Picture a massive terraforming project spanning 100s of acres of a planet’s sun-drenched surface. Row upon row of harvest ready crops cut, collected and threshed by an army of automated robotic combines. While it may sound like something out of a science fiction novel, today it’s a reality thanks to the flexibility and reach of 5G.

If you were party to some of the early presentation of 5G’s potential to revolutionize farming the idea may not sound so far fetched, but you may be surprised that it is already in play. Centria University of Applied Science Agriculture Department, Enterprise Connectivity Solution provider Bittium and their autonomous vehicle division teamed up with Cumucore to the bring the dream of a full automated, remote controlled robotic farm to life. 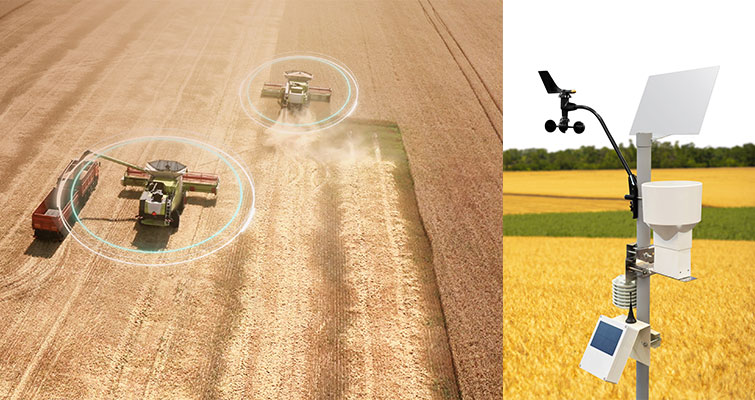 While the technology involved in the automation of the equipment, the vehicles, robotic extensions and perfierals and the software to run them was easily demonstrable, the ability to deliver that functionality and productive output across large swaths of farm land simply couldn’t be done without 5G. Cumucore thus provided the linchpin to unlock the potential of this thoroughly modern, even utopian dream of a fully functional farm without workers toiling in the sun.

If you’d like to explore how 5G could be a force multiplier for your business and operation, we invite to book a demo with one of our 5G MPN experts.

Is 5G over hyped?